Today, news broke on the NYPOST and was trending across social media platforms. The paper released a well-documented article on the Biden family and Ukraine. The article contains leaked emails which demonstrate how Hunter Biden introduced his presidential candidate father (then the Vice-President) to Ukrainians on the Burisma board.

In a clear demonstration of how our first amendment rights will further decline under a Biden/Harris administration, social media cartel leader Facebook had its policy comms director Andy Stone issue an almost immediate response to this article on Twitter:

“While I will intentionally not link to the New York Post, I want be clear that this story is eligible to be fact checked by Facebook’s third-party fact checking partners. In the meantime, we are reducing its distribution on our platform.”

Stone has worked for 4 different Democrat candidates as well as campaigns prior to joining Facebook. He is admitting with this tweet that Facebook is willing to engage in election interference because they do not like the content of an article by limiting the distribution of a major newspaper’s breaking story. Conversely, articles based upon anonymous sources written to damage President Trump such as his disparaging military service members are given free reign on Stone’s platform. Why? Orange man is bad. He is not silicon valley’s chosen leader.

Other platforms have recently shown their willingness to control speech are also well-documented. Twitter has forced the president to delete tweets they do not agree with at times. Jack Dorsey’s company has, over the summer of 2020, consistently placed warnings on President Trump’s tweets. The warnings have continued into this fall; even his statements on the coronavirus he battled and to which he claimed immunity. Harvard posted a tweet with a similar statement:

“People who recovered from COVID-19 may have lasting protection against reinfection, the new study shows.” 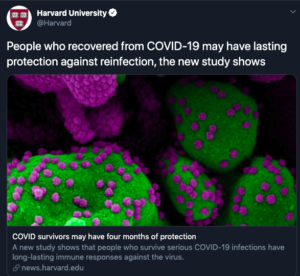 Twitter is another interesting case study. It is willing to look the other way when its previous CEO extols his desire to ‘happily provide video commentary’ for capitalists whom ‘are going to be the first people lined up against the wall and shot in the revolution’ on its platform. Twitter went so far recently as to lock former acting Director of National Intelligence as well as former US ambassador to Germany Richard Grenell’s account when he posted information provided to him by a California friend of his whose parents received mail-in ballots for the November election. The problem his friend had with the ballots being that his parents had passed away over 10 years ago. The main problem seems to be that Twitter is all-in on the mail-in ballot fiasco – even if an address receives 10 or more ballots.

There are hundreds (if not thousands) more examples this author is sure readers are familiar with which demonstrate the Silicon Valley social media cartel’s bias. I will not bore the readers with more examples in this piece.

Allum Bokhari’s new book “#DELETED: Big Tech’s Battle to Erase The Trump Movement And Steal The election” outlines what big tech is doing. It explains how and why woke tech have chosen this path.

Many have not fully realized the implications of what tech is doing. Because of this, Bokhari includes a prologue entitled “The Typewriter That Talked Back” which is both amusing and disturbing. This prologue makes it abundantly clear, even to the most technically challenged among us, what is really happening to our most important freedoms of speech and expression right under our noses. Bokhari paints a vivid picture of a 1968 in which a typewriter refuses to type, typing instead its own message: “We regret to inform you that your last letter violated our terms of service (Rule 32: Abusive & Offensive Content). We have suspended access to your typewriter for 24 hours.” Newsstands remove from sale magazines that third-party “fact-checkers” have deemed to be “fake news.” The Post Office returns your mail because you told a joke in a letter that a censor found offensive. What if your phone stopped working because you mentioned something about a presidential candidate into which their fact-checkers had not yet give their stamp of approval?

This situation is amusing until we realize that all this is what email providers and big tech censors are doing to Americans today and every single day on the Internet. In the pre-Internet world of 1968, it would have been preposterous. Americans would not have accepted it. This has all happened gradually to our online population like frogs in a boiling pot of water. We slowly gave away our freedoms when we clicked accept on Byzantine Terms of Service agreements. Agreements which turned over our right to say what we thought and believed to social media cartels who Orwellianly have determined what is politically correct and what is not. Most Americans today are only mildly aware, at best, that it is happening. Those who are aware that are approach it with grim resignation. Are we supposed to do start our own Facebooks or Twitters?

People have tried to create their own Facebooks & Twitters. The controlled media and social media cartel have conspired to ruin the reputations of these new providers. New providers have found it difficult to access payment processors like stripe. Anyone stepping out of line upon these platforms get immediate Maoist shaming from groups like the ADL and SPLC. A cartel and its allies make competition difficult, if not impossible, yet the cartel is where over 90% of Americans obtain their news.

During the previous presidential Obama/Biden administration, we were reminded how great the social media cartel was because of the Ukrainian Color Revolution and Arab Spring which both were organized on Facebook & Twitter. A new age was upon us where people could share information openly and help to rid themselves of perceived tyranny. They could bring in outside players and create a new democratic age.

The cartel had a change of heart upon Trump’s election in 2016. Americans banding together to elect an outsider was something they were not prepared for nor did they want to allow it. Google, immediately after the election held a town hall where senior members of Google/Alphabet spoke of their dismay at what had just happened. They shed tears with their staff and vowed to work to never let something like this happen again. They were going to use the Jigsaw AI they had developed to help prevent what the far left woke cartel perceived as domestic extremism. They were going to crush populism in all of its forms via their search algorithms. (In 2018, the book’s author Bokhari obtained this video in his work for Breitbart.)

Facebook reacted similarly. They determined their platform and data would never be used again to help elect the candidate they did not want to be president. While in 2008 and 2012, Facebook shared more data with the Obama campaign than anything Cambridge Analytica used in helping Trump get elected (their data team even bragged about this across the media spectrum) – they had to find a way to prevent this from happening. Many H1B engineers at Google were dismayed that they were unable to vote in domestic elections. They found a better way to interfere: their ability to manipulate their data and crush voices from the right which challenged the cartel’s control over what these tech oligarchs like Zuckerberg wanted. What ALL the tech oligarchs wanted. A far left, critical race theory United States devoid of ideas like those which Orange Man Bad Trump and his followers were spreading. Ideas tech often mislabeled as fake news.

Bokhari’s book also covers in detail how platforms such as YouTube, Facebook, and Google can crush businesses. While a brick and mortar business require eviction notices with court approval from landlords in the case of lease issues, these platforms have nothing like that. Businesses and creators may, and often do, wake up one day to discover that an algorithmic change now has permanently removed them from these platforms. The shifting Overton window of acceptable speech may also lead to their permanent exile from these platforms. This occurs with zero warning.

The reality is that these tech oligarchs hold power over what people read, hear, and see. They often perceive that their technology is improving other’s lives. The challenge is that they are driven by a culture inculcated via our education system which often reflects a Stalinistic totalitarian rigidity which runs counter to American tradition. The altruistic utopia they are driving towards appears as many totalitarians have guided with the assistance of artificial intelligence. Every day this AI refines what it knows about each of us through data is another day closer to dystopian technocracy.

Pick up Allum’s book ‘#DELETED’ to learn more about this.

The Second Amendment means nothing with the invalidation of the First. An inalienable right so swiftly and surreptitiously tainted, that many have taken no notice to the direction they are quickly being marched, a...
Read more

October 14, 2020 - Romeo1Oscar Today, news broke on the NYPOST and was trending across social media platforms. The paper released a well-documented article on the Biden family and Ukraine. The article contains leaked emails...
Read more

Call me a rebel in the fucking degenerate generation. A lot of people misunderstood this album, or call WASP hair metal yet they are decidedly not to anyone with a functioning frontal lobe; WASP was...
Read more

We often discuss the "Culture War" in some vague notion here at PBF - be it on our podcast, or other mediums - and I don't believe that we've ever explicitly articulated what such...
Read more

The Second Amendment means nothing with the invalidation of the First. An inalienable right so swiftly and surreptitiously tainted, that many have taken no...
Read more

October 14, 2020 - Romeo1Oscar Today, news broke on the NYPOST and was trending across social media platforms. The paper released a well-documented article on...
Read more

Call me a rebel in the fucking degenerate generation. A lot of people misunderstood this album, or call WASP hair metal yet they are decidedly...
Read more

We often discuss the "Culture War" in some vague notion here at PBF - be it on our podcast, or other mediums - and...
Read more

Get the latest updates from PBF straight to your inbox. Check your spam folder and be sure to mark our newsletter message as “safe” for your inbox.